In 2014, I wrote my first pet obituary for our beloved dog, Freckles. She impacted me as much as many of my other human friends and family have and I knew her longer than some of my other friends that had and have since passed. I wrote this obituary as a gift for my family and through this learned that I love writing pieces that capture the beauty a life can hold and share with the world.

Because this piece is so important to me, I requested that my family allow me to post it here (with some minor editing and personal information removed). 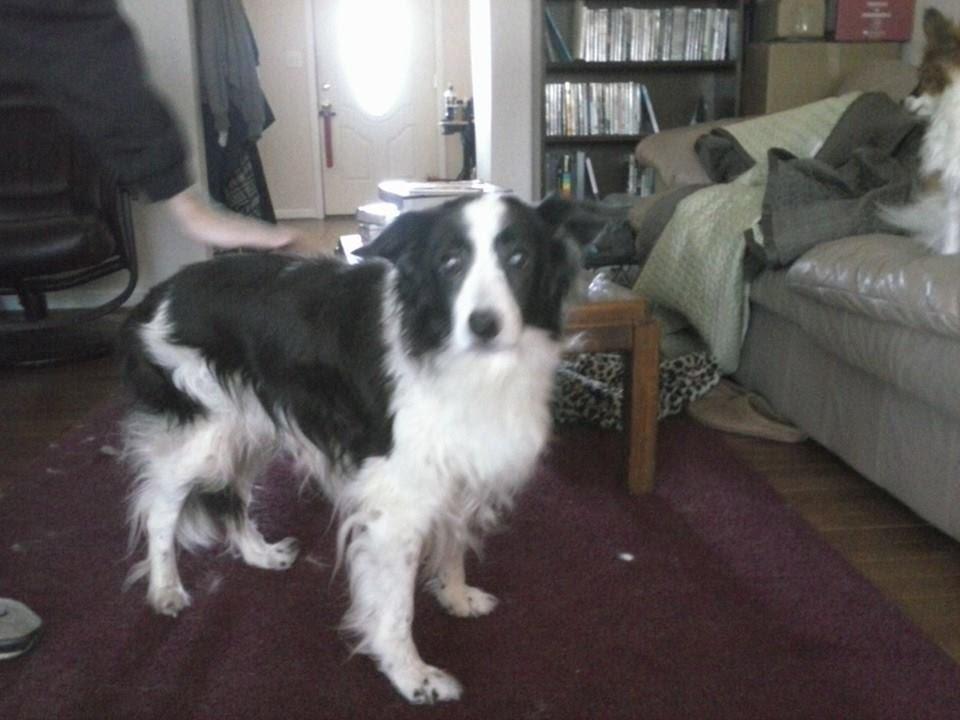 On the 29th of August, 2014, our family lost their furry daughter, Freckles. She lived a long life of almost 20 years filled with love, adventure, excitement, mischief, and the never-ending need to prove her intelligence to those bipedal creatures around her. Shortly after Joe arrived with another moving truck, Freckles suffered from a stroke, causing her to lose the majority of control over her hind legs and develop severe reoccurring seizures. Our family would like to extend our deepest gratitude to a new family friend and neighbor for finding a veterinarian that would take us on short notice and relieve Freckles of her pain and suffering in the kindest, gentlest, and fastest manner possible while Glenda and Lo held her, kissed her, petted her, and spoke very softly to her until she passed peacefully.

Freckles joined our family when she was 8 weeks old, rejected by her mother, abused, neglected, and scared of the world. Joe and Jennifer went to Winchester, Virginia to pick up her from the Virginia Border Collie Rescue League during January 1996. Since then our family was blessed with the most amazing friendship and companionship.

When this small 8-week old puppy arrived in our hearts and home in Annandale, Virginia, Rebecca convinced the family to name her Freckles because of the markings all over her legs. Unlike most dogs, responding better to distinct “-ee” or other long vowel ending names, Freckles immediately responded and took on her identity. Perhaps this was the first sign that we had gotten ourselves into trouble with adopting a precocious and intelligent dog gifted with unique cognizance and an understanding of the English language.

The powers that be gifted Freckles with a strong herding instinct. She herded everything. On at least one occasion our family was blessed by watching a small puppy corral a group of slugs on a back patio and herd them. Chickens too could not escape her herding instinct. Our former chicken, Chica, constantly engaged in a battle of tolerance and wits with Freckles as she would crouch in the grass and sneak up on Chica to begin herding her again after Chica’s retaliations against her. Other animals that did not escape her herding instincts included the Canadian Geese at the local community college campus, rabbits, many many insects, and anything else she could herd, sometimes including house guests.

In addition to her herding instinct, Freckles was also gentle and loving. As an example, one night Freckles collected two small baby mice and very gently carried both in her mouth over to where Joe slept and deposited the two babies on his chest. She succeeded in waking Joe and insisting on him caring for them as she nudged them to make sure they were still alive.

As a young dog, she accompanied our family on trips to Florida, New England, and Canada. One of her favorite past times were car rides with Joe and the family. A particular memory from these travels includes a hotel in Montreal, Quebec. After a long day of driving, Joe attempted to piece together bits of French and English in order to communicate with the hotel staff tried to get approval for Freckles to stay in the room with our family. The hotel concierge eventually simply asked “No yap yap?” in broken English, and Joe grateful for the language breakthrough responded “No. No yap yap.”

When Joe’s father passed away, she looked for him everywhere, following his scent around the house in Falls Church, Virginia, mourning his death and crying with Joe. She comforted Joe in silence as he dealt with the loss his best friend, father, and role model in life. Freckles also aided the rest of our family during this hard time, comforting each member individually in very personalized ways, and communicating with us through her imitation of the human language. She kept our entire family together and sane during the greatest loss we had suffered at that point in our lives.

Freckles’ exceedingly brilliant intelligence included many talents, such as problem-solving, language comprehension, obedience, her ability to act as an obedience teacher, and playfulness. Shortly after Freckle’s first growth spurt, she began opening the door to let herself outside, as just one example of her problem-solving abilities. Additionally, her talents in the English language are not to be ignored as part of her remembrance. On more than one occasion Freckles answered yes or no questions by nodding or shaking her head. She also regularly imitated the English language when greeting Joe upon his arrival home from work each day. There is no question that Freckles understood almost everything anyone said within her hearing range. Shortly after obedience training, it became clear that Freckles’ obeyed commands only on her own terms, yet she passed her obedience and expectations of obedience on to other family dogs shortly after their arrival in the family.

Her joy and vivacity in play with Joe were incomparable. Three of her favorite games included Tug-Of-War, the Black Drain Pipe, and catching the hand monster. Freckles aged with grace, dignity, and pride for herself and her family.

Our Family was always welcomed home, snuggled, and sought after, sometimes out of herding instinct, but mostly out of love. Our family human children: Jennifer, Rebecca, Lo, and Austin walked protected by her through the yard, and guarded every moment we walked through the streets of the neighborhood. She watched over the safety of all of Joe and Glenda’s children and the friends of their children of which she approved, both furry and bipedal.

Freckles will be cremated and her ashes placed in an urn made of pink granite to match that of our family memorial. At a future date, our family will take Freckles’s remains on a final trip to Savannah, Georgia to visit the family memorial in a small private ceremony.

Our sincerest thanks to all of our friends and family during this difficult time.

Thank you for reading Freckles’s obituary/memorial today. The comments section is reserved for readers to share their own personal experiences and thoughts around pet obituaries. Do you agree with having them written? Disagree with them? Comments are moderated only to prevent spam and middle school style indecency. Once you have one approved comment on the website you won’t have to wait for comment moderation. I try to get comments approved as quickly as possible.

One thought on “Pet Obituary: Freckles”

This site uses Akismet to reduce spam. Learn how your comment data is processed.